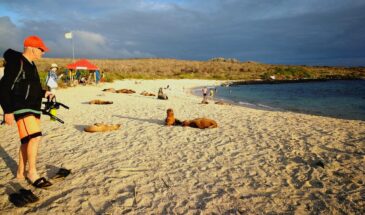 A place of history where we will find information on the origin of the islands and their endemic species.

In the surroundings of Mann beach you can see a large number of birds of different species that feed and nest on its shores. Different trails that start from the town center will take you to different places of visit that are relatively close and that have great natural beauty; among them the wolf house that houses a colony of sea lions.
We can observe a great variety of marine fauna such as sea lions, turtles, terejové, frigate dolphins, sea lions, Galapagos tortoises, robin gannets, blue-footed gannets, marine iguanas, dolphins and Galapagos gulls,

It is also of interest for historical reasons as it was the first site where Naturalist Scientist Charles Darwin landed in all of the Galapagos.

Cerro tijeras is located on San Cristóbal Island in Puerto Baquerizo Moreno, it is a place where you can especially see frigates and the beautiful Wreck Bay, as well as Puerto Baquerizo Moreno in all its splendor.
Ideal place to take a bath and do Snorkeling and enjoy the immense marine fauna that we have on the island.

There are no reviews yet.